Kusama – Infinity is a fascinating film about the life and work of contemporary artist Yayoi Kusama born in 1929. Directed by Heather Lenz, it follows the traditional format of such documentaries with a host of famous ‘talking heads’ such as gallery directors from the Tate, colleagues including Carolee Schneemann, and Kusama herself. It charts her origins and upbringing in Matsumoto, Japan and primarily her dedication and determination which went mostly unnoticed before her consequent move to the US.

The development of her work is examined and contextualised: connections are sought between real life events and landscape, her internal psychology (she underwent Freudian analysis when she was younger and is currently living in a psychiatric hospital); and the thematic strands of her work. Beginning with the ‘net’ pieces inspired by seeing the pattern of fishing nets spread out on the surface of the Pacific Ocean from the aeroplane, the movie goes on to describe and show her love of dots and discs, chairs covered with white protruberances, the famous kaleidoscopic ‘infinity mirrors’ rooms, and ends with the current complicated collages and larger-than-life sculptures reminiscent of Joan Miro. 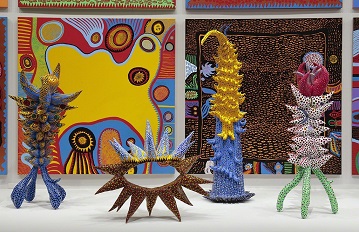 She was at the forefront of artistic / political activism having lived through the Vietnam War (“I thought it was wrong, why send this beautiful [human] body to war”); the more conservative Nixon era when there was very little support for contemporary art, never mind female artists on the cutting edge; the space age (seeing the world as a series of very small spots from high up); the dropping of atomic bombs on Hiroshima and Nagasaki (“I made my art to try and change people’s minds”), and free love (she presided over the first homosexual weddings). To all of these she took a stance, responding with art, poignant and plaintive poetry, and costume.

There is a great deal of often compelling historical footage, particularly of her wonderful ‘happenings’. In ‘Narcissus Garden’ she hawked mirror balls for 2$ outside the Italian Pavillion of the Venice Biennale in protest. When the police tried to move her on, she stripped off her kimono revealing a red bodysuit and posed among the balls – never one to miss out on a photo opportunity.

We are shown the letters between Kusama and Georgia O’Keefe from whom she asks advice early on; we see her in a non-sexual relationship with the famous artist Joseph Cornell (27 years her senior) who called her his princess; and hear how Frank Stella was the first to buy her artwork for $75 (it subsequently sold for and enormous $750,000).

Like Louise Bourgeois who used her insomnia as inspiration, the two women also share the use of eyes, stitched work, and blood-red imagery, albeit this latter speaks of classic female subject matter. A contemporary of Niki de Saint Phalle, she has also worked on a monumental scale with bright blocks of colours and complex design including dots and eyes. In turn, she has clearly influenced contemporary female artists such as Anna Ray and Joana Vasconcelos. There are also tastes of indigenous Australian art and traditional Mexican patterns to be found. Pat Oldenburgh is quoted as saying that Claes (her husband) got the idea of soft sewing from her, and this and other blatant plagiarism caused Kusama to fall into depression.

She constantly struggles with her mental health and the film addresses the possible origins of this – some “trauma in a field of flowers”; being sent by her mother to spy on her father’s sexual liaisons; being forced to sew parachutes in a military factory; and having her art torn from under her, all as a very young girl. There are lots of stills showing her with manic and tortured expressions, shots covering her multiple suicide attempts, and in her own words: “I covered myself in polka dots until I disappeared”.

There is not much to criticise in the film: she is described as touting her work “aggressively” in New York, such terms being used repeatedly about her intense resolution to get her work seen. It was sometimes difficult to know who was speaking at any one time, but it is questionable whether the language used to convey her behaviour would have been used for a male artist. 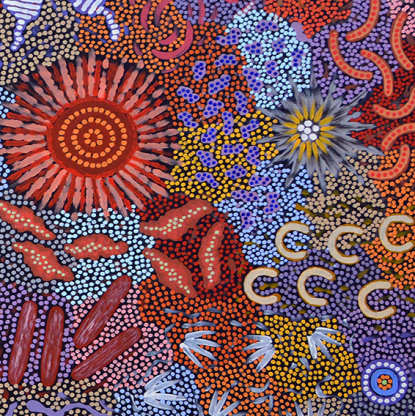 Kusama on the left, Michaelle Possum Nungurrayi, ‘Womens Ceremony’, an example of indigenous Australian art on the right.

Nowadays she is feted, and the feature opens and closes with her sporting a magenta bob and matching spotted dress, painstakingly painting massive and complex, undrafted art work (up to 33’ / over 10 metres) in primary colours full of symbols and, of course, dots.

I walk, explore, and love to give and teach Shiatsu. tamsinlgrainger@gmail.com View all posts by tamsing