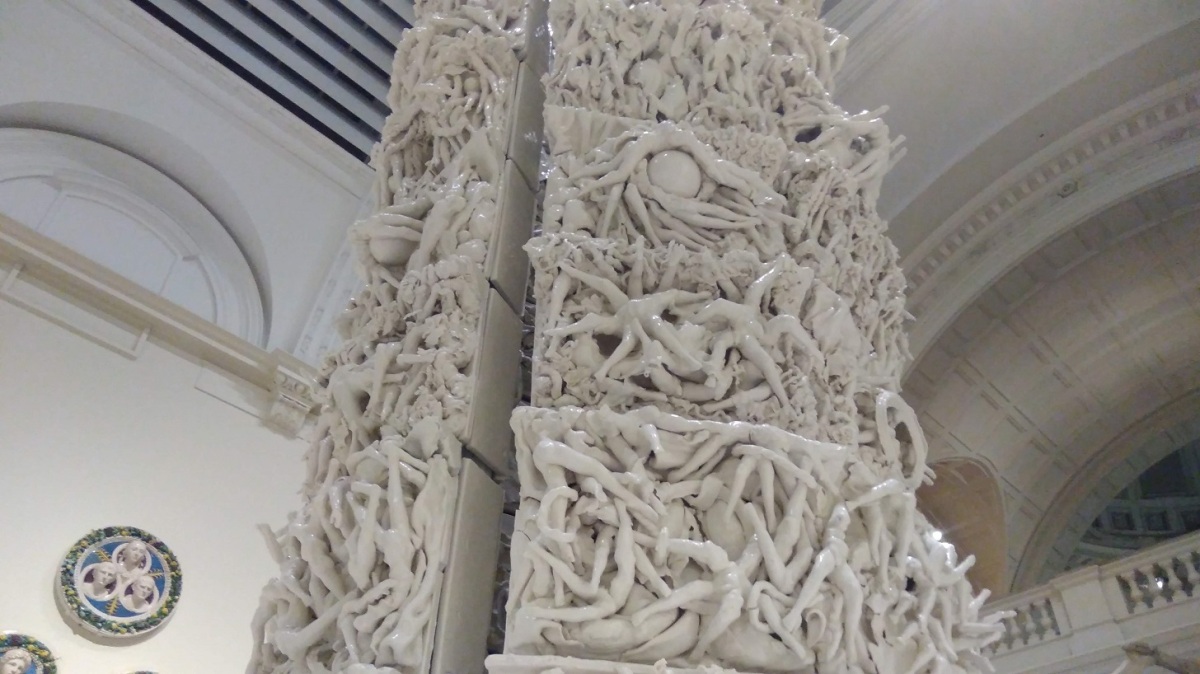 Contemporary sculpture at the V & A, London.

399 Days is a tower of white ceramic, a monumental contortion of barbie legs by Rachel Kneebone  at the Victoria and Albert Museum in London.

Standing nine panels high and seven around, each one the size of a large floor tile, it consists, as much of her sculpture has, of female human limbs sticking out at all angles – a 3D tumble of lower body parts. Holding its own amongst the classics, it is sited cheek by jowl with traditional male statuary – sculpted nudes the colour of blanched almonds: the Rape of Prosperpina, the massively violent Samson Smiting a Philistine (by Giambologna), Jason, and Narcissus (incidentally the name of one of her other works) – and is redolent of Rodin’s famous studies but lacking the muscularity.

Complex in both its sexuality and asexuality, the shiny, almost alabaster surface is similar to, but contrasts with, the matt marble skin we are used to in the halls of the Greeks. 399 Days is chaotic and disorderly next to the Classical form and structure of the ancient ones. Some of Kneebone’s have neat, hairless hints of vaginal cracks – there is nothing natural or wild about them except the overall disarray and partial sculptural splits as if they broke in firing and have been purposely left as reminders of the changes we undergo through age, and of imperfection. These types of legs in fact call to mind the physical ‘perfection’ of upright models with oh-so-slim pins. Have these shop dummy legs been discarded? Are they unwanted or rejected? If so, by whom?

We think of  more contemporary artists such as Louise Bourgeois’ Untitled (with foot) who subverts the feminine image in order to both comment and question.

There are sections which include the ornate decoration familiar from Old Master’s picture frames: cloth and wreaths cast in cold porcelain not gilt, orbs and semi-orbs which are a recurring theme in her work (The Area on Whose Brink Silence Begins 2015), and which I then notice on building facades and ornate Rococo altars as I make my way around London. Referencing the art and decoration which went before hers in this way forces us to site the work in the context of the voyeurism and appropriation of that tradition.

More chilling are the images of mass graves which are invoked – interlaced piles of chilly nudeness – again that implication that human life is worthless, throw-away, making it impossible to identify them. There is no personal element, as if that would make us question the apparently random distribution. On closer inspection, it is clear that some have pregnant bellies though they are the bodies of girls not women. There is no prettiness, and there are some arrangements and juxtapositions which almost trick the viewer into forgetting they are life copies, where the legs protrude from a central point, for example, like a bunch of stalks with feet as flower heads.

Depending how you approach the Medieval and Renaissance Collection where Kneebone’s sculpture is situated, you may glance into the Cast Courts and see Master Oudrey‘s plaster version of the original 1st century AD stone Trajan’s Column, ‘iconic monument of the classical world’.

It is a frieze of low relief from Rome depicting the history of Trajan’s campaign. Once again using a form from an earlier era, 399 Days literally turns such figures upside down, depriving them of the rest of their body and fascinating the onlooker who must tour and crane to appreciate her artistry.

This V&A is at Cromwell Road, London, SW7 2RL. There is also a new one in Dundee., Scotland.

I walk, explore, and love to give and teach Shiatsu. tamsinlgrainger@gmail.com View all posts by tamsing