Dance and music inspired by African culture is almost always joyous, and We Are is no exception. Part of the Just Festival at St John’s, the show was devised and performed by Adaawe with Anindo Marshall (co-founder) on vocals and percussion, Dez “the Pharoah” Glover using drum kit and vocals, and Chiyumba Ossone, also on percussion and vocals – all from Los Angeles. They are backed up by Karel Kalef (bass guitar), Neil Martin (guitar) and Suzy Cargill (percussion), all from Edinburgh. They are on stage with Ula Enaholo (vocals), a talented teenager from our local Royal Lyceum Youth Theatre, and a host of enthusiastic and committed children from the Marion Sweeney School of Dance in Linlithgow, just outside the city. Dedicated to and inspired by the women of Ghana, West Africa, they bounce off their own ethnic roots from Africa to the Middle East, Morocco and Panama, as well as the US. 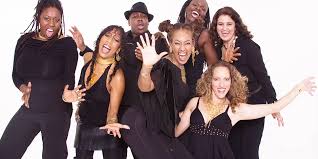 The show consists of a series of acts, opening and closing with rousing vocals and gentle dance numbers from the whole cast. The children, despite only rehearsing on skype until this weekend and then having two practices once the key women had arrived on Scottish turf, are fantastic; ebullient and really skilful considering their age. Moving the upper torso in the traditional African way is contrary to all Western styles of dance training and yet they do it admirably.

The key theme is that of the strong matriachs who inspired the central cast, amongst them Rosa Parks  (who in 1955 stood up against the dominant white folk by remaining in her seat on the bus); and Malala (who was shot on a bus in 2012 for standing up for education for girls). Using projections on a banner at the back, white face masks, moving lyrics, dramatic poems, live recordings and simple but effective movement, the show teaches us about these powerful women and invites us to sing along in celebration.

This first night was not without its (temporary) technical difficulties but the cast were dedicated and wholly present. This is something rare: a work which is both entertaining and educational – absolutely ideal for teenagers to instil strength and determination by learning from their forebears.