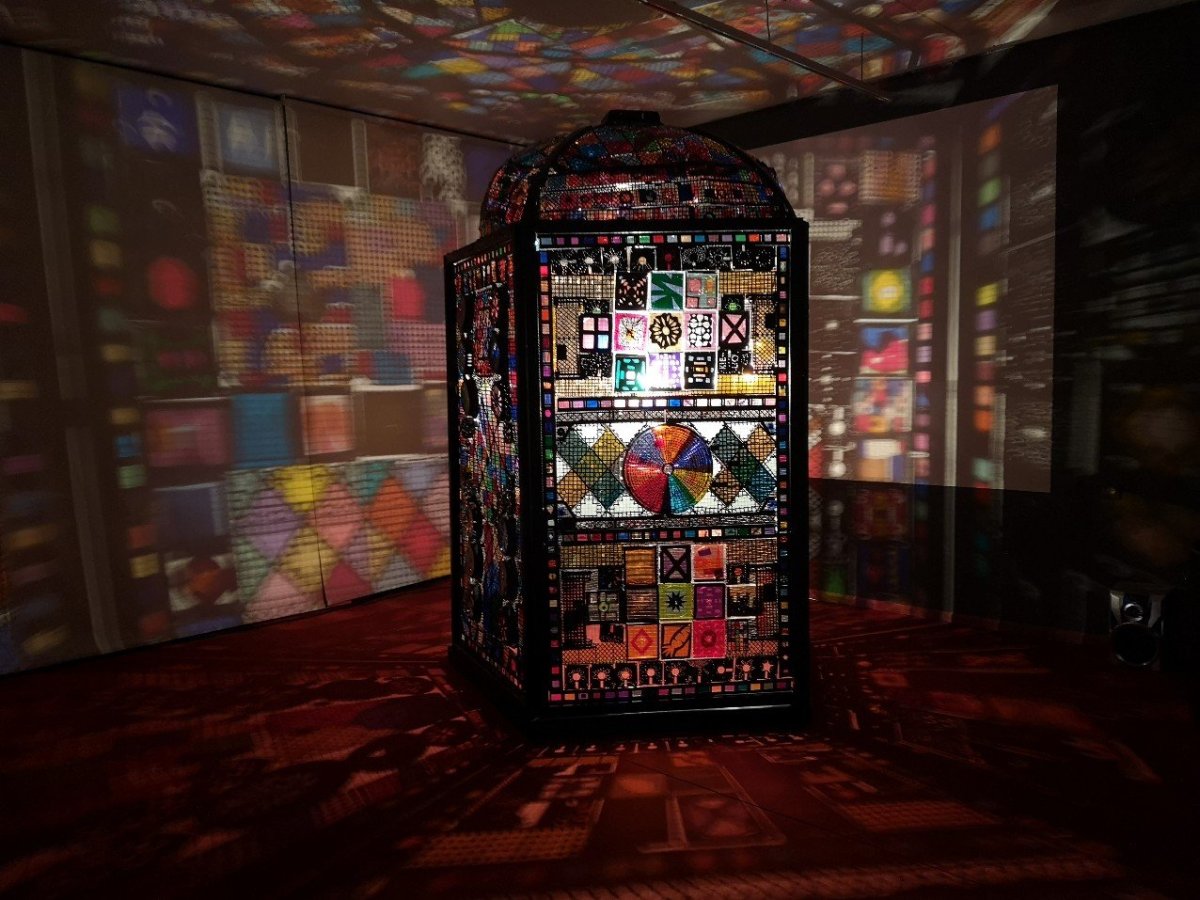 Give A New Life, the 7th Recycling Art Exhibition

I saw this beautiful Giant’s Lantern by Kristiina Tuura, a Helsinki based artist who made this work from rubbish, recycled and found objects. It pays respect to the hundreds of years old tradition of skilful Syrian lantern making. Made with the help of school children and immigrant students.

In Tuli Reinsoo’s work, a giant soft jigsaw of colour, fabric and script, I was invited to Play! Mangi! to move the pieces around as I fancied and make a new art work as I did so. Nothing is ever missing, the blobs which fit into the corresponding holes are part of the outline and the spaces between the pieces are as much part of the transitory, ‘final’ work.

The juxtaposition of fish swimming across the chest, pithy phrase emblazoned on T shirt harks back to Freud’s ‘Sometimes a cigar is just a cigar’, a sideways reference to his constant search for meaning in dreams (although some say he never said that!) At one and the same time we accept what is, and are prompted to look into what exactly a herring is in this context.

This installation, using fabric and embroidery, comments on the indolence and habits of the TV watching public. Lounging and dozing while the images flower and grow on the sunseen screen.

Martikainen (weaver) writes that what lies behind her work is her worry that too many children are having to face fear, violence and hunger and that they should all have the same rights to a safe and unique childhood. I found these tapestries poignant and, taken from photographs, life-like.

In 2012, the church of St Virgin Mary, Kulautuva, Lithuania was all but destroyed by fire. Afterwards, however, statues of the Virgin and Christ were found ‘miraculously preserved’. Grasiene was touched by the smiling face of St Mary despite the tragedy and that set her to think about how we are left after terrible things have happened in our lives.

Mutually beneficial interacton between form (the furniture maker’s chair) and pattern. Comfy and utilitarian, also images of growth and shadow to sit on.

The Exhibition of work from the student’s of Olustvere TMK textile industries at Pärnu Muuseum were not far removed from natural Scottish woven cloth from the Scottish Islands. The hues and textures were juxtaposed with lace and ornamental buttons to make the cushion covers practical and adding artists touches. 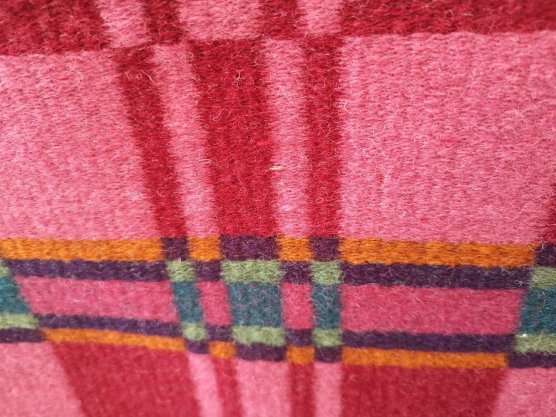 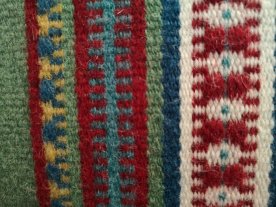 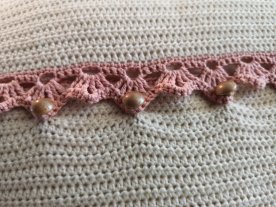 This one woman show features wall-sized artwork which speaks of Raadik’s internal reproductive organs and their metamorphosis. Addressing fertility, menstruation, and the private monthly morphing of the ovaries, together with their abnormalities, these starkly beautiful, computer produced images defy the impersonality of technology. Yet they speak clearly of 21st century medical procedures at the same time as mythical, precious ‘golden’ eggs. Laid down before birth, here the presumptious belief that they will be ready when we need them is challenged. Red of blood and suffering, emotion and the flashing light of danger, precision of ovoid and sphere, this exhibition was moving and fascinating.

Many thanks to the lovely woman who was watching the exhibition when I visited it. She was informed, friendly and most kindly drew up a list for me of art places to visit in Tallin, where I was headed later that day.

This was a very large exhibition in a utilitarian building on Freedom Square, full to the brim with 20th century artwork in varying media. 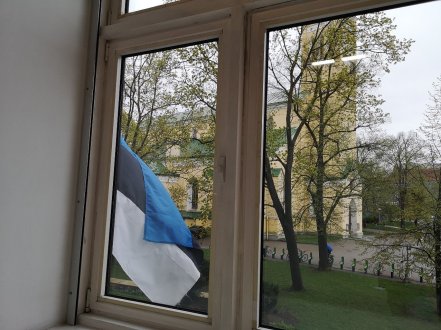 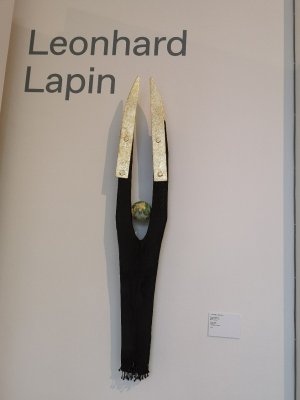 Starting at the beginning with the larger than life size cave person about to hurl a rock, and with hints of the big bang, this exhibition simultaneously conjures our possible, some would say, likely, dénouement. Seemingly using concrete, a semblance of lasting weight, it turns out to be empty inside and easy to push over. These materials concretise the sometimes solid sounding, hollow actions of our apparently sophisticated world. Both stark and comic-al, here is the destruction of our planet and interconnected neanderthal behaviour. It’s a warning!

The internal heating pipes asked to be photographed! Once again the young man who opened the door to me (you have to ring), who could have been rather fed up as I arrived a mere 5 minutes before closing, was solicitous and shyly infromative, taking me into the back afterwards so I could see examples of the upcoming exhibition.

Also to see in Estonia

And don’t miss the ambitious art park planned for the bay of Pärnu, where each of the countries of the nine states of the Baltic Sea including Finland, Sweden, Estonia plus the autonomous Åland in the downtown of Pärnu. The Victoria and Albert Museum, in Dundee has recently opened in the harbour if you are visiting Scotland any time soon.