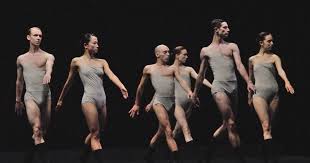 These two 55-minute shows performed on consecutive nights by the Israeli L-E-V Dance Company are pure contemporary dance, as pure as it gets: five dancers, minimal lighting, an almost constantly berating soundtrack from the tick – tick of the opening to the relentless techno rhythms of the rest; and bare movement. In OCD, the performers enter one by one unobtrusively from corners or between curtains, limbs picked out of the shadows by dull light, and begin their desperate, compulsive movements. In Chapter 2, all five are onstage continuously and the dance language is almost identical with the score and repetition building to an infernal pace with no end in sight.

OCD Love is more OCD than love and you won’t necessarily get either unless you read about it first. Once you do know, it definitely is obsessive. Sharon Eyal’s choreography is highly original. Her deeply personal identification with Neil Hilborn’s poem, OCD, has resulted in an intense, strung-out and internal set of motifs which are, of course, repeated. In the same way that this ultimately destructive behaviour is an external sign of something desperate happening inside, so it is well nigh impossible to empathise. One watches with a sort of horror, but does not kinaesthetically participate in it. The audience’s initial confusion and lack of understanding may well be a reflection of the sufferers themselves being unconsciously controlled and driven. 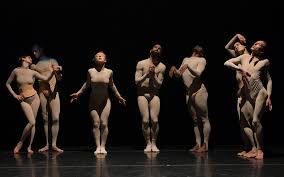 The choreographic impetus for both pieces is at the centre (as you would expect from Eyal’s formative association with Martha Graham) and the torso is racked with convulsions, shudders and twitches. The endless arms and legs octopus-wave sequentially from there, then nudge with jagged elbows, sink deep with knees angular, or keep the impossibly persistent beat of soft steps. Each body is taut with tension, especially the shoulders, and the backbends are excruciating, with hands that reach so far behind, you wonder that they belong at all.

Fingers grasp and pull back the head of another, mimetic palms claw own breast and abdomen, hips jut suggestively in frequently bird-like trajectories around the stage. Very occasionally there is a breathless hiaitus, and once there is a terrible crash on drums and with fist and the audience shocks. Perhaps there is a slight tenderness between two, more likely there are empty arms where a partner should be – these beings are locked into themselves.

The performances are 100% solid, impossible to fault, which is almost unheard of. Without doubt they are drilled and dedicated. The long-standing collaboration between Eyal and composer Ori Lichtik’s grand score is perfect, and the watchers’ final cheers were surely a response to the sheer quality of the work.